Weidenfeld & Nicolson has pre-empted a “breathtaking” memoir from Tanya Shadrick about waking from a coma “determined to stop sleepwalking” through life.

Editorial director Lettice Franklin acquired UK and Commonwealth rights in The Cure for Sleep from Robert Caskie at Caskie Mushens. It will be published as hardback, trade paperback, e-book and audiobook in spring 2022

Agent Robert Caskie said: “Tanya has that very rare combination of stillness and energy. Her stories captivated me instantly and her experimentation with style and genre impressed me greatly. I am delighted to represent her and thrilled she has found such a perfect fit with Lettice and W&N. Now more than ever it is important to empower voices and enhance creativity.”

Extracted from The Bookseller, December 13, 2019 by Mark Chandler

Signed with Caskie Mushens for The Cure for Sleep (October 2019) 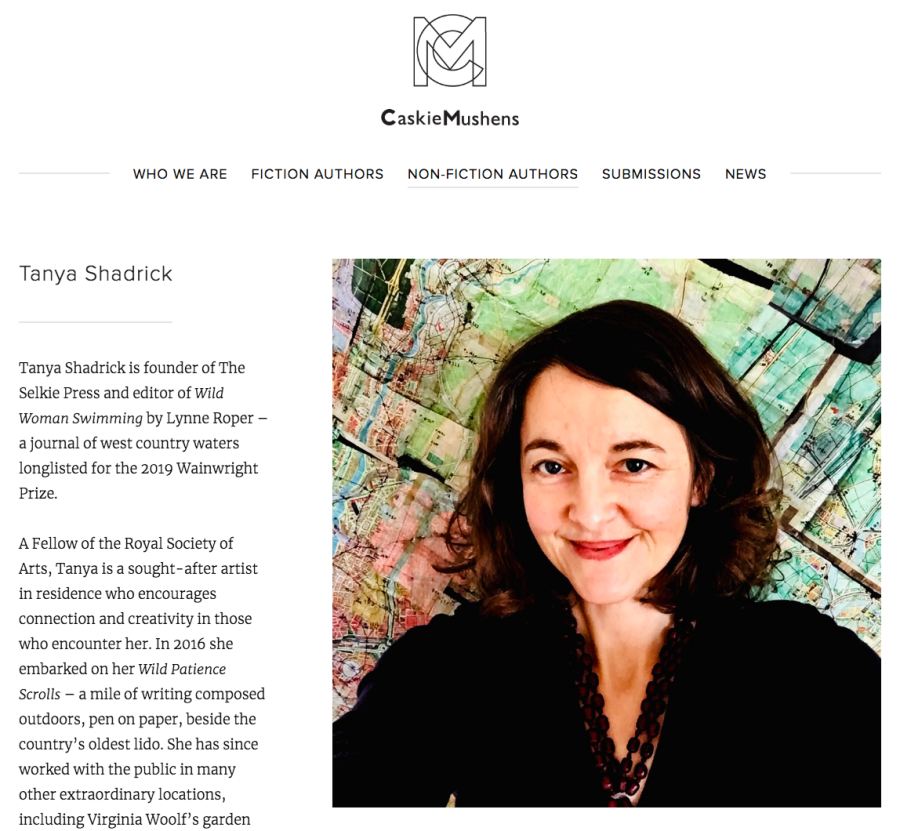 Signed with agent Robert Caskie at Caskie Mushens for The Cure for Sleep – joining a non-fiction list that includes nature writers Marc Hamer (How to Catch a Mole) and Julian Hoffman (Irreplaceable).

Celebrating its sixth year, the prize is awarded annually to the book which most successfully reflects the ethos of renowned nature writer Alfred Wainwright’s work, to inspire readers to explore the outdoors and to nurture a respect for the natural world.

You can read a sample chapter from Lynne Roper’s posthumously-published Wild Woman Swimming: A Journal of West Country Waters, edited and published by Tanya Shadrick through The Selkie Press, on the Wainwright Prize site.

Flash Fiction finalist. The annual Brighton Prize is open to international entries and exists to find inventive new writing. With its roots in Rattle Tales, a performance group, there is an emphasis on stories that work as well on the stage as the page.

He says something about first kissing his wife, two decades ago, the gulf of it – the distance between two people who haven’t touched yet but will – so she (not his wife, but the woman with him) wonders if this is it finally. She is to be tested, and found wanting. 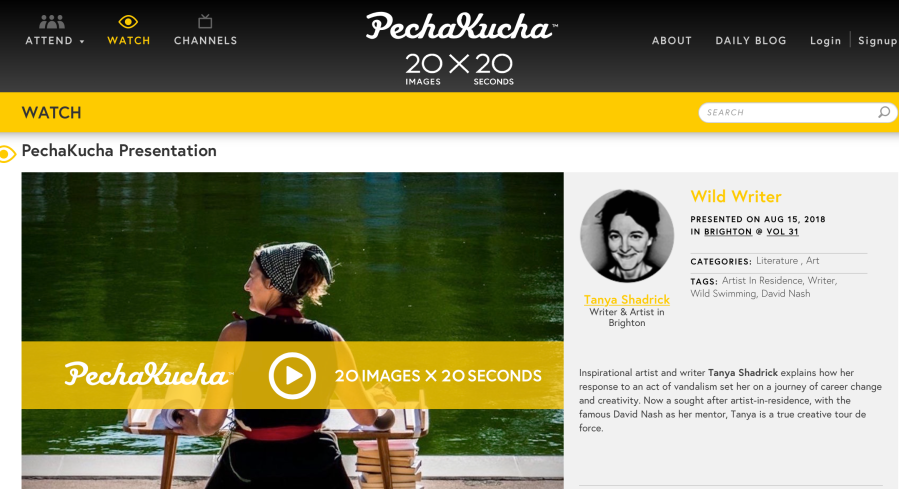 PechaKucha 20×20 is a simple presentation format where you show 20 images, each for 20 seconds. The images advance automatically and the speaker talks along to the images. In her Wild Writer talk, Tanya speaks of the roles of accident, emergency, chance and effort in her late-emerging creative life. Recorded live at the Brighton PechaKucha gathering.

The Wild Patience Scrolls – a two-season mile of writing – are included in this Radio 4 feature on durational art, alongside the Ash Dome of David Nash and James Turrell’s Roden Crater.

Fellow of the Royal Society of Arts (March 2018)

Accepted as a Fellow of the RSA with its mission to ‘enrich society through ideas and action’ and belief in the power to create. One of ten nature writers invited to describe a winter walk for this Christmas special feature.

Co-presenter of this 3-hour archive special looking at the history of ordinary people talking on British radio:

Fi Glover trawls the archives for intimate stories of the everyday, tracing how curated wartime spirit developed into today’s unmediated snapshots of life, with the help of writer Tanya Shadrick.

From Olive Shapley’s Mass Observation-inspired recordings in the 1930s and 40s, via Radio Ballads and Down Your Way, they arrive at the verbatim examples of 20th Century Vox and The Listening Project, charting the development from patronised ‘ordinary folk’ to the autonomy of contemporary voices.

And inaugural-year recipient of a residency at this leading European foundation for writing and literature, staying in one of 7 new architect-designed ‘treehouses’.

The Foundation describes its mission as being “to foster literary creation and encourage the practice of reading through a range of initiatives and activities. These include mounting exhibitions and cultural events that have a connection with writing and literature, making a large multilingual library available to the public, awarding an annual prize in world literature, granting financial support, and…hosting a writer-in-residence program.”

The residency was awarded so the Wild Patience Scrolls – which became an accidental seismograph of Britain changed by the 2016 Referendum – could be completed in a European context.

Return visit by BBC South East Arts Correspondent Robin Gibson to my Wild Patience at Pells Pool, following announcement of award from the Jan Michalski Foundation for Writing and Literature in Switzerland.

Narrator and subject of this short film by the Canal and River Trust to support their new Let’s Fish initiative. The piece pays tribute to the men & women in all our communities who give their time freely to help others learn this skill and tells too the story of Tanya’s own relationship to fishing.

I’ve wanted to fish all my life. My father was a skilled angler — fished in the Devon and Cornish seas where I grew up, tied his own flies. One of my earliest memories is of watching him casting from a riverbank & my feeling completely still & happy in my skin. But he left just after my second birthday and chose never to spend any time with me after that. He left behind a knitted fishing cap on an out of reach peg in the porch, and I think it — or fishing — became a symbol of this bigger thing I’d lost. I got a bit stuck about fishing too — it was a thing I wanted in my life, but I didn’t want to go on a course or teach myself. Sounds a bit folorn I know but I wanted to be taught the way a child learns from a family member! So I just collected things to do with it instead – hence all the books and fishing flies on my writing desk.

Part social history, part memoir, Swell uncovers a world of secret swimming…A joyful hymn to the sport and an exploration of why swimming attracts so many women.

The author of this rich new social history of swimming spent a day with Tanya at Pells Pool in the 2016 season:

“Tanya writes eloquently about that ‘young self’, a nine-year-old enjoying the freedoms of a long country summer…and how ‘the coast and its cold water was the site from which her glorious sense of self-sovereignty sprang’…In Tanya’s words one can feel the sense of personal ownership and self-sufficiency that resided, unexamined, in her young body.. Nobody rules you, nothing has ruined you, you are gleefully, determinedly, yourself.

In this 6-page feature (Laps of Longhand) Tanya writes on the deep oriental influences at work in her mile of longhand (with images by project photographer Steve Creffield).

Oh Comely is a British bi-monthly with highstreet distribution which describes itself as a ‘curious, honest and playful independent magazine. It’s a place to meet strangers, hear their stories and look at life differently.’